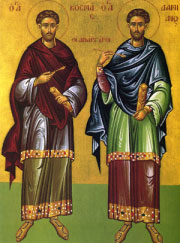 These Saints Anargyroi Kosmas and Damianos, who are different from those that we celebrate on the 1st of November, were from Rome. They were physicians, freely bestowing healing upon those asking help, asking nothing from the healed other than that they confess and believe in Christ. They ended their life in martyrdom in the year 284, under the Emperors Carinus and Numerian. 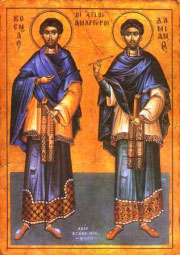 These Saints were from Asia Minor. After the death of their father, their Christ-loving mother Theodota reared them in piety and in all manner of virtue, and had them instructed in every science, especially that of medicine. This became their vocation, and they went about healing every illness and malady, bestowing healing freely on  men; because of this, they are called ” Anargyroi.” And thus, having completed the course of their life, they reposed in peace.