Saints Kyrillos and Methodios, Equal of the Apostles and Teachers of the Slavs 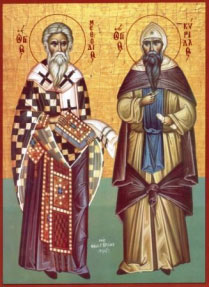 Saints Kyrillos and Methodios, Equals of the Apostles, and Enlighteners of the Slavs were born in the Greek city of Thessalonica. Saint Methodios was the oldest of seven brothers, Saint Constantine [Kyrillos was his monastic name] was the youngest. Saint Methodios was in the military. Saint Constantine distinguished himself by his great aptitude, and he studied with the emperor Michael under the finest teachers in Constantinople, including Saint Photios, the future Patriarch of Constantinople. The emperor soon summoned both of the holy brothers and sent them to preach the Gospel to the Khazars (NE of the Black Sea). They stayed in the city of Korsun, where they found a Gospel and Psalter written in Russian letters [i.e. Slavonic], and learned to read and speak this language

Saint Constantine with the help of his brother Saint Methodios and the disciples Gorazd, Clement, Sava, Naum and Angelyar, he devised a Slavonic alphabet and translated the books which were necessary for the celebration of the divine services: the Gospel, Epistles, Psalter, and collected services, into the Slavic tongue (Cyrillic Alphabet). This occurred in the year 863.

After completing the translation, the holy brothers went to Moravia, where they began to teach the services in the Slavic language.

Saint Kyrillos died at the age of forty-two in Rome on February 4, 869 AD

Saint Methodios continued to preach the Gospel among the Slavs.